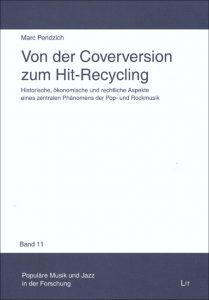 Marc Pendzich – „From cover version to hit-recycling – historical, economical and legal aspects of a basic phenomenon in pop & rock music“

Hit-recycling including cover versions, sampling-based songs and secondhand-hits is the pop-phenomenon of the recent years: A never ending topic for media-observers, the biz, music listeners and collectors.

The german musicologist Marc Pendzich provides in his book for the first time the whole „cover-story“, beginning in the 1950s with countless so-called white covers in the U.S. up to the contemporary international widespread hit-recycling. He explains the international legal basics of cover records in short. Furthermore the author shows the pop historical roots and the musical, economical and legal reasons for the extensive hit-recycling – and the resulting consequences for pop music, musicians and record industry.

With an exceptional feedback in over 80 reports in well-known newspapers, on TV and radio, plus a three-hour-Primetime-TV-Show on public MDR in 2005, this book was well-received in Germany with a wide audience of media-observers, music listeners, musicians, musicologists, jurists and collectors – and bridges a market gap in the pop book market.

This dissertation, published first in Germany in 2004 and followed by a updated second edition in 2008, is the world-wide first and only detailed book about the international rock/pop-phenomenon „cover version“. The study analyses popular music history of the complete 20th century and focuses on the US-, UK- and german rock era, especially of the last 15 years. The book includes – comprehensive as well for non-jurists – the legal basics of cover versions for US-Copyright and German Author’s Right. On this wide base of historical and legal aspects (underlined with numerous music-examples), the current phenomenon „hit-recycling“ – the collective use of numberless songs of the whole rock era adapted in cover versions, bastards and sampling-dominated songs – is detailed analysed multidisciplinary under musicologist, media scientist and economic aspects. In this part, the study focuses mainly on the german music market. It is both the from digital revolution most suffering pop market of the western world and moreover the record-breaking market concerning hit-recycling. The study presents for the first time detailed statistics and graphics about the triplication of cover versions in the german single charts since the mid-1980s. The average percented each year is aboth 20 percent.

The initial point of the study was a notable change in pop music, recognizable since 1994 in the international charts: At that time, the former underground pop styles Hiphop and Techno got part of the international mainstream. Key of this partly unattended overwealming commercial success was the multiple and specific use of the formerly old-fashioned principle of cover versions.

The augmentation results mainly from “modern“ cover versions of the market segments Hiphop and Techno/Dance. But there are several “classic“ artists either, who weren’t typical cover interprets before. Cover versions of uncharted records are seldom now, in contrast to e.g. the 1970s. Today, cover versions are generally secondhand-hits of well-known and “approved” classics. Furthermore cover versions aren’t a temporary medium to start a pop career anymore – now they are normally a marketing instrument to drop a one hit wonder-project in the charts.

The reasons for the contemporary hit-recycling in the international charts are complex and narrowly cross-linked:

Moreover the trend is benefited by a 50-year-old history of pop music with an enormous pool of great pop songs. And more important, this pool is basically unknown by the young target group. The role of the financers of the hit-recycling, the record companies, has to be accented. The enterprises determine the promotion or non-promotion for certain music styles and acts by their company policy and initial investment. In this point of view, the multiple publication of cover versions is a significant symptom of a mainly short-termed business objectives especially of the major companies. This tendency increases in the current vehement economic crises of the record industry.

The study concludes, that – although individually surely an enrichment – the mass publication of cover versions isn’t reasonable neither in pop cultural nor in long-term economical regards. All in all, the german market (as a negative example) is mainly cover-version-driven – and not artist-oriented like e.g. the U.S., U.K. or the french market. Although the music business respectively artist-building is a very hazardous investment in these days: The short-termed strategy of hit-recycling combined with endless one hit wonders and multi-artist-CD-compilations instead of album-and-artist-oriented marketing with an emotional-based fan-artist-relationship has utterly failed in the formerly world-wide third largest music market of Germany.